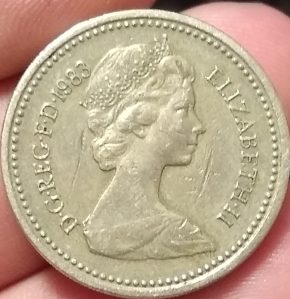 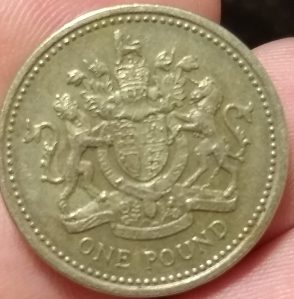 Today we’re highlighting a different part of the collection which is a foreign coin – a British Pound. This particular pound is dated 1983 which has some significance because it was the first year that the new pound coin was circulated. 24carat.co.uk had this information about the two faces on the coin:

Obverse
The obverse of the coin shows the Arnold Machin portrait of The Queen which was adopted for decimalisation, and has been used on nearly all UK coinage since 1968. It continued in use until 1984.

Reverse
The reverse of the coin shows the Royal Arms, and it is appropriate that it should feature on one of the nation’s premier coins.
Queen Elizabeth II is a direct descendant of the Sovereigns of England, of Ireland and of Scotland. Accordingly Her Majesty is head of the oldest continuing Royal Lines in Christendom. As the embodiment of the Sovereignty of those countries, Her Majesty quarters their historic Arms.
The Royal Arms achieved their present form upon the accession of Queen Victoria in 1837 and have remained essentially the same ever since.